The headline of this article is 50% meant for effect. Thommy Price and Neil Peart have never, to my knowledge, set their drums up face-to-face and had it out.

If you’re a Rush fan (and I am, being a both a drummer and a Canadian), I apologize for shocking your system with such a bold statement. But we’re going to put some things into perspective with this one.

Thommy Price is as rock solid a drummer as there is.

Give a listen to just a few of his drum parts from the massive catalog of hits that he’s played on – including Billy Idol’s “Rebel Yell” and Joan Jett hits galore – and you’ll soon realize that the Thommy Price rock groove is in our DNA.

And this is the point. If the aforementioned drum battle is only played for those who can appreciate Rush, then half the population is excluded from the vote. Sorry, no girls like Rush. And, not all guys like Rush. I do, but I’m only one vote. And don’t ask me to choose. I’m trying to be an impartial referee here.

And let’s add another factor to the Thommy column: he plays for Joan Jett.

Now, this article is about Thommy, but let’s really put this into perspective. Joan Jett isn’t  just a girl in a band. She’s definitely not just “a female musician”. Joan Jett is the SOURCE of women in rock. She is ground-zero. Joan Jett is as ROCK as Keith Richards. She IS rock.

And as musicians and fans know, there is no great band without a great drummer. So if Joan Jett IS rock, then Thommy Price is the backbone of rock.

The Best Drummer In The World: I’ve heard that you’ve been on the road since you were 15 years old. How did your career get rolling?

Tommy Price: I started on the road at 15 or 16 in cover bands on the Jersey Shore, and then once I got out of high school I actually went on the road for months at a time. As in “out of New York City.”

I was in a band at 17 years old on RCA Records that was produced by Jimmy Iovine called Flame. That was my first real big thing. We did a full record for RCA, and that opened a lot of doors for me.

Later on I joined Mink Deville and started going overseas a lot. He was very big over there. So at 19-20 years old, I was touring 3 or 4 months a year over in Europe. We did a record for Atlantic which Ahmet Ertegun had signed the band. The record didn’t do much in the States, but was again huge in Europe.

TBDITW: You then ended up playing with Scandal. How did that go down?

TP: Scandal had an EP out with “Goodbye to You” and I joined the band to do the tour. We broke that record on the road. We toured for about a year and a half, going from one tour to another. We went from playing with the Kinks, Adam and the Ants, John Cougar, and more. That was what you had to do in those days to break a record.

Then we came off the road and began working on The Warrior at Electric Lady Studios. There was a guy upstairs in the same studio who needed a drummer, and that was Billy Idol. So I was actually doing both records at the same time in the same studio. Whenever I had a few extra minutes, I’d run upstairs and do a few tracks with Billy and then run down and cut a few tracks with Scandal. Both records, The Warrior and Rebel Yell, came out at the same time.

I had no intention of leaving Scandal, but I got into Billy’s music and there were some business things and Billy offered me something more. Billy didn’t know me from Adam and offered me a piece of the pie and took care of me. So I never toured The Warrior.

TBDITW: Did this inspire you to do session work? Did you aspire to that?

TP: Before that, I was kind of a session guy. I worked with Tom Verlaine from Television and did a bunch of small records, but nothing that was really on the radio. Having worked with Jimmy (Iovine), he got me on other records. He opened a lot of doors for me and brought me in on records and doing a lot of session work at The Record Plant.

After The Warrior and Rebel Yell came out, people started hearing me. Debbie Harry called me. Peter Wolf called me. Instead of just playing to pay my rent, I got to pick and choose which records I wanted to play on.

TBDITW: How did you develop such a straight-ahead rock style with your unique pocket?

TP: I wouldn’t get called to do a jazz record. I always explain that I grew up loving John Bohnam, but my 2 favorite drummers are… I love what Keith Moon did with The Who, and I really loved blue-eyed soul, R&B music. My brother had all these Rascals records and I loved Dino Danelli. If Dino Danelli and Keith Moon knocked each other up, their kid would be me.

TBDITW: How did you end up in the Blackhearts?

TP: Joan’s partner Kenny Laguna was a friend of mine. Kenny was a staff producer at Leber-Krebs, and I had this band, and Kenny was sent out to produce these demos. So at 16 years old I met Kenny Laguna.

Five or six years passed, and I ran into Kenny and he and Joan were putting the Blackhearts together. I came up and I played with Joan. I wanted to be in the band but unfortunately about 3 days before, I had secured the Mink Deville gig. It’s not like I regret it, because Willy Deville taught me a lot about R&B music and I learned a lot by being in that band. But I should have been the original drummer in the Blackhearts, but I had committed to this big European tour, etc. So the Blackhearts had gotten together, and a few years later I went to see their show at Radio City and just decided, “This is the band I should be in. It’s perfect for me. That band is custom-tailored for me.”

TBDITW: Joan Jett and the Blackhearts seem to never go out of style. With all the  “grunge” or “alternative” labels we’ve gone through, why do you think you guys are always in style?

TP: I think because first of all Joan is/was a total innovator. Let’s face it, she had one of the first all-girl bands. That alone is a huge accomplishment. And at 16 years old!

Joan’s music, she has a very distinct style. And with her style, through all the trends that have come and gone, we have never veered from that style. We’ve always kept it from the heart, and the band still sounds like the Blackhearts. Other bands try to replicate it, but for us it’s like why try and un-develop a sound that we created? It’s like Kentucky Fried Chicken. Why mess with a perfect recipe? Plus in this business, you’ve always got to keep your spirit and your sense of humor and your humility in check.

TBDITW: Tell me about the new Joan Jett record Unvarnished.

TP: There are so many great tracks on this record. We just did a video yesterday for the single called “Any Weather” which Dave Grohl plays drums and bass and some guitar on. Of course Joan sings it and plays guitar. There’s actually 2 versions on the record, the Dave one and the Blackhearts one.

You know, the songs inspired me and there’s a lot of stuff drum-wise where I really feel I’ve stepped it up a notch and the record came out amazing. I can’t wait for it to come out and for everyone to hear it.

TBDITW: Thanks, Thommy! We’ll see you on the road. 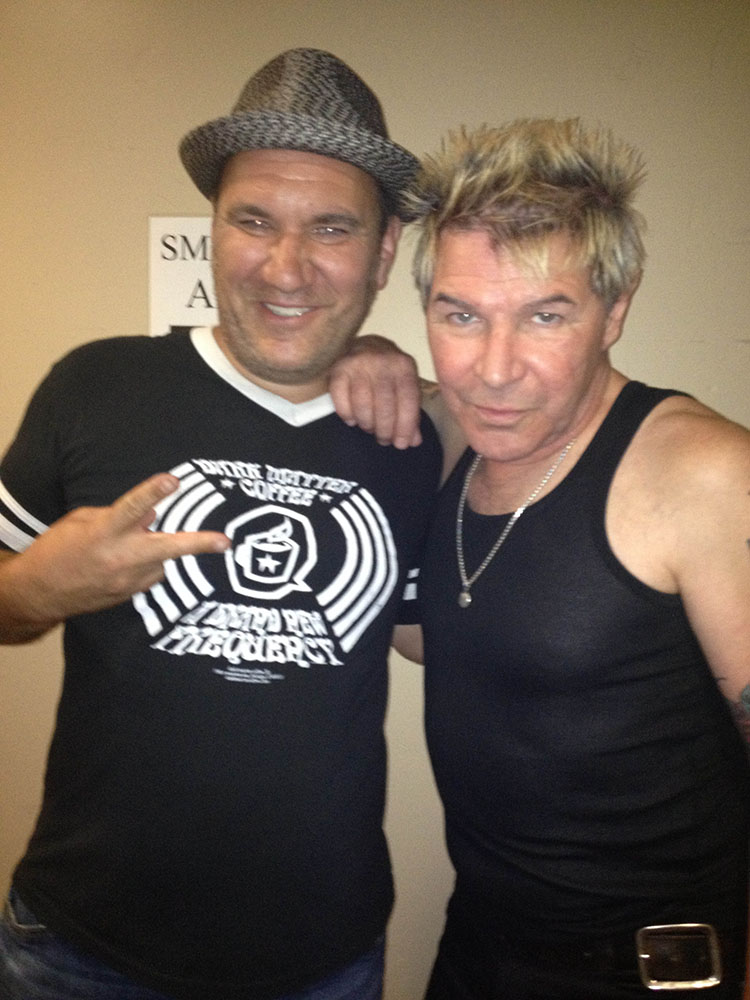 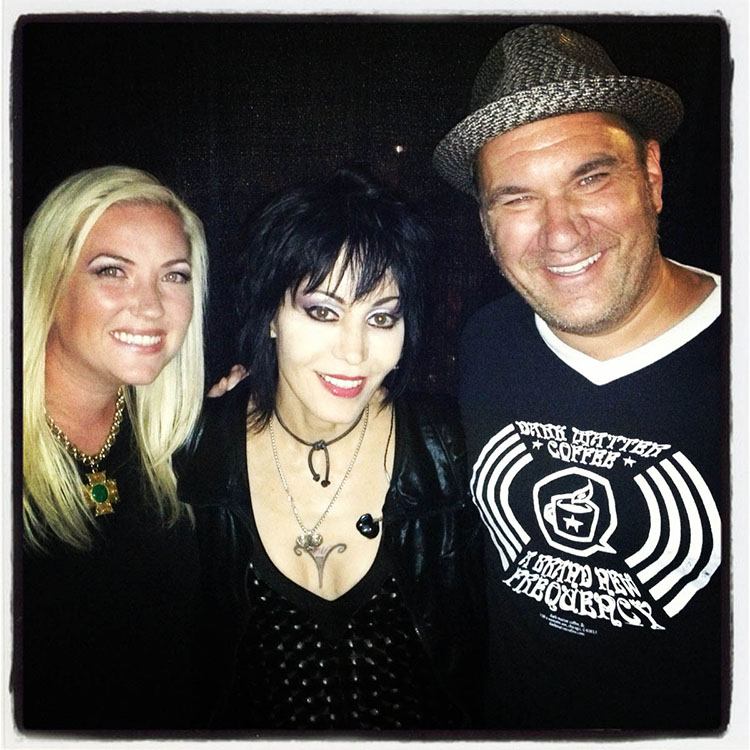 See Thommy on the road with Joan Jett and the Blackhearts: http://www.joanjett.com/