Jim Macpherson is a Rock Icon

Jim Macpherson is a rock icon.

And he should be to you, too.

I’m going to try to put something into context here.

Do you know that by the end of 1993, there were only 623 websites in existence? Literally, the Internet was a novelty. MTV “VJ” Adam Curry registered MTV.com and ran it himself as an unofficial side project.

And a band from Dayton, Ohio called the Breeders (a side project for Kim Deal of the Pixies) released a record called Last Splash. 20 years have passed by since this happened.

Drummer Jim Macpherson did not respond to an ad on Craigslist to join the Breeders.

“I was playing in this band with my friend Nick and he said he knew where Kim deal of the Pixies lived. We could go put flyers in her mailbox for every show we had to see if we could get her to come. Kim saw us, asked Nick if he wanted to do some demos. He said ‘yeah’ and she said ‘well, can we get your drummer too’ and that’s how it all started.”

“I was doing demos for Last Splash… Kim asked me, ‘Hey, you wanna see how you do with Josephine (Wiggs)? We got asked to do some shows and we’re going to need a drummer, and we’re going to make a new record. You want to see if it’ll work out?’ I said ‘yeah’.”

“Kim kept telling me, ‘You’d have to be doin’ this to really play music because you realize there’s not a whole lot of money in this,’ which was true.”

“I asked what were some of the shows and she said, ‘Well, Nirvana asked us to open for them in Ireland on the Nevermind tour.’  I just played Canal Street Tavern for 150 kids and my first show with the Breeders is in Dublin, Ireland in front of 15,000 people, opening for Nirvana.”

“That was before we even recorded… talk about getting thrown in…”

With the calculated pseudo-perfection of 80’s hair metal a couple of years in the grave, people were using this word grunge all of the time. Mostly because record labels, corporations, and media need to label things.

So in January 1993, the Breeders came to San Francisco to record what would become their classic album Last Splash.

“We had most of the tracks written and a good foundation down.”

“One day me and Josephine would go in and lay down our tracks and then they (Kim and Kelley) would want to lay down their parts right away. So it was recorded on a song by song basis.”

“The majority of songs, Kim had tunes but she would ask me to play stuff to them and she would either say yes or no. She didn’t say, ‘I want you to do this or that’ you know… I’d give her ideas and she’d just go ‘yeah, that!'”

“It wasn’t like dissected with a lot of musician talk. Kim would say, ‘yeah that’s a neat beat and we’ll do that there, and do this here.’ Then Kelley would do a guitar line and we’d jam out until it sounded good and then we kept what we liked.”

Last Splash went on to sell over a million copies fueled by the hit single “Cannonball”.

After the Breeders played Lollapalooza in 1994, rock excess had taken hold in the band. Kim Deal had been planning to do a solo record and Josephine Wiggs had some other projects in the works. Kelley got in trouble. Thus was born The Amps’ record.

According to Jim, with 3 Dayton boys in the fold (including Nate Farley and Luis Lerma), the trouble continued to the point where he had to bow out of the Breeders.

“About a year later I had started playing in a local band called Real Lulu and we opened for Guided By Voices in Indianapolis, and a week later Bob called me and asked me if I wanted to join Guided By Voices.”

“So I played in GBV for 2 or 4 years. I did (Bob solo records) Kid Marine and Waved Out then Do The Collapse and Isolation Drills. I also did Moping Swans and Soft Rock Renegades. With Bob it was easy to get a lot of output because he just writes so much, 3 records a year!”

I asked Jim about the contrast of writing and recording the Breeders record with doing the GBV “big production debut” Do The Collapse with Ric Ocasek.

“We (GBV) were really well-rehearsed at that point, as we had been constantly touring. But when I actually got in the studio I freaked out and lost my shit. Looking through the control room glass seeing Ric Ocasek, who I idolized in high school. I was fucking up, I was so nervous that we actually went out for a walk at one point around New York. I think he knew I was nervous and I needed to see he was just a regular guy (laughing).”

“He did make us track quite a few times because he wanted the take that was perfect from his point of view. It took a few times but we got through it. Again, we were really well-rehearsed so it took about 4 or 5 days to get my tracks done.”

If you’ve read through this site at all, it should be obvious that my obsession with GBV runs deep.

In truth, it was Kim Deal who tipped me off to GBV at Lollapalloza 94 when she had Bob come on stage for a song. She said, “This is Bob from Guided By Voices. They’re from Dayton. We’re from Dayton.”

I saw them on the side stage a few hours later and was both blown away and intrigued beyond belief. They seemed like regular guys.

In the end, this is why Jim is an icon for me. He’s a regular guy.

If you look at the super-processed MTV heyday of hair metal that spawned the indie rock revolution of the 90’s and compare this with today’s world of American Idol and YouTube videos of Miley Cyrus’ twerking controversy, it seems to me that the majority of the world has learned the wrong lessons.

Technology has evolved, and the great hope of the Internet was that the power of making music would revert back into artists’ hands and you can just put your records online and you don’t need record companies anymore.

The lessons of Jim as an icon are simple. Be true to yourself. Work hard. Keep your day job. Enjoy making music while you’re doing it.

If you end up getting lucky enough that 20 years later people still love your music, cherish it. The world needs regular people with extraordinary gifts like Jim and Bob Pollard and Kim Deal continuing to make music.

Jimmy Mac is a Rock Icon. 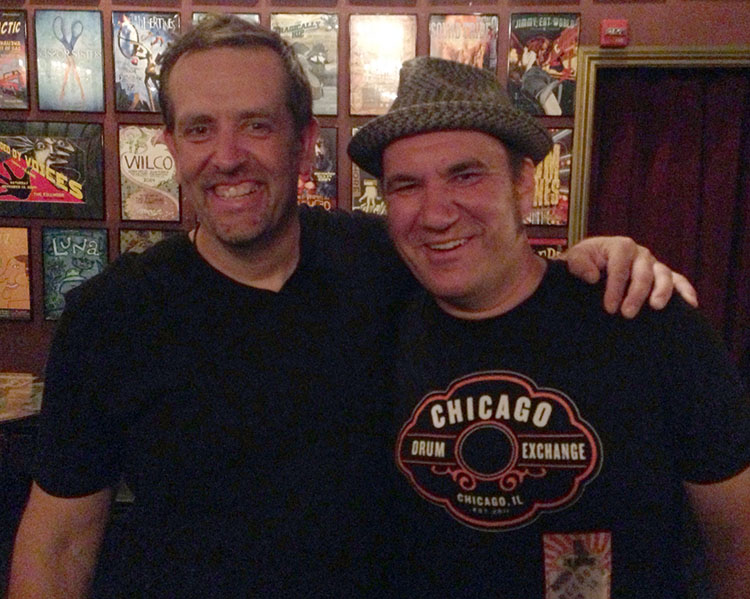